She was disqualified on Sunday for breaking several house rules which included disrespect for the Head of House position which she was occupying, goading, among other things.

Her disqualification stemmed from a disagreement she had with fellow housemate, Laycon over comments about her making attempts to kiss him (while she was under the influence of alcohol).

Ebuka in his usual attempt to ‘shake tables’ in the house, had last week asked Laycon if indeed the comments were true and he affirmed it. But Erica who at the time had made it clear that she was ‘just friends’ with Laycon and only had a mental connection with him, was clearly offended by comments.

According to her, she had confronted Laycon and made several attempts throughout the week to clear the air since she couldn’t remember trying to kiss him but he refused to have the conversation.

It wasn’t clear what had transpired during the Saturday night Gordon’s sponsored party, but afterward, Erica who was clearly intoxicated began raining insults on Laycon over the comments and his refusal to address the issue.

All attempts by fellow housemates to calm her down, including Kiddwaya with whom she shares a romantic relationship, fell on deaf ears. 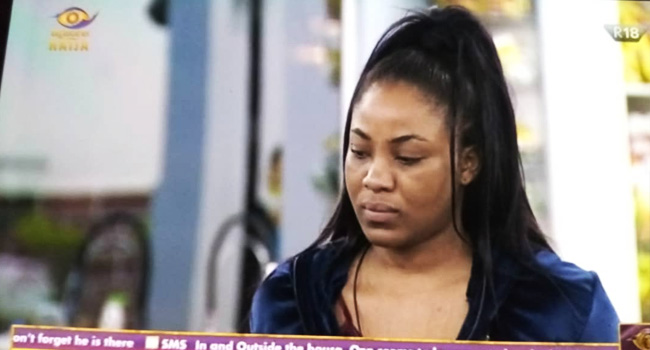 She rained insults on Laycon who refused to respond and later also accused Kidd and Prince of being two-faced and not fully supporting her.

Much later, she said she would ensure that Prince who is the Deputy Head of House, would not sleep in the Head of House lounge with her.

She proceeded to pour water on his side of the bed despite pleas from other housemates.

Among other things, she was also seen peeping into one of the camera control rooms through the glass – which is against the rules of the House.

On Sunday afternoon, she, however, apologized to all the housemates and admitted to going overboard regardless of being intoxicated.

But her tantrums had stirred reactions across social media with many suggesting that it might warrant a disqualification especially because she had already earned two strikes and a final strong warning over previous misconducts.

Erica’s disqualification makes it the third time a housemate would be disqualified from the game in the last three episodes.

Last season (Pepper Dem), housemate, Tacha was disqualified from the game for getting involved in a fight with fellow housemate and winner of the season, Mercy.

In the previous (Double Wahala) season, Khloe and K-Brule who were a pair were disqualified after earning three strikes. Khloe was, however, forgiven and brought back into the house.

With just nine housemates and three weeks left in the lockdown season, the game clearly has become more tense and real to the housemates as they battle for the grand prize of N85 million.

I wasn’t part of the protest against SARS, I only went there to calm them down – Davido says during meeting with IG of...