Post Views: 231,916
Florence Ajimobi, the wife of the late ex-Oyo governor Ajimobi, had an open exchange of words with Oyo deputy governor.
Mrs Ajimobi complained that the Oyo state government had not commiserated with the family on the death of her husband.
The effort of the Oyo deputy governor to offer explanation led to a heated response from Mrs Ajimobi, thereby prompting other governors in attendance to wade in.
Florence Ajimobi, the wife of the late former governor of Oyo state, Senator Abiola Ajimobi, has a heated argument with the deputy governor of Oyo state, Rauf Olaniyan, over the death of her husband.
A video clip published by Nigerian Tribune shows the duo engaged in an open exchange of words on Sunday, June 28. 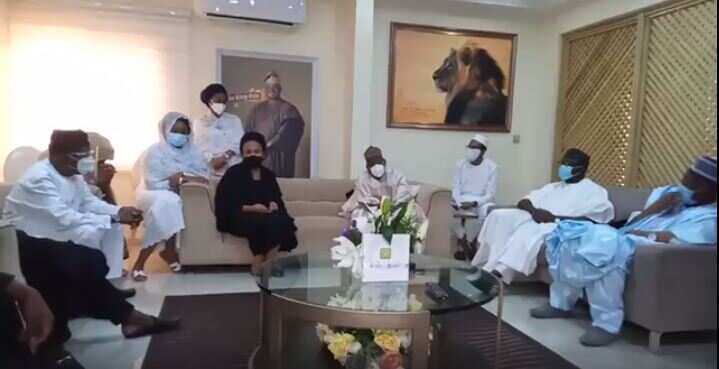 The newspaper explained that the argument took place during the visit of some governors to commiserate with her and the Ajimobi family.
Ajimobi’s wife, Oyo deputy governor exchange words after burial. In the video, Mrs Ajimobi is seen complaining that the Oyo state government had not commiserated with the family on the death of her husband. Her words: “I think the least anybody can do, as a God-fearing person, is to send me a word of encouragement at that time.
Read Also:Kalu, Ngige, Nnamani bid late Ajimobi farewell
And even after he died, not even you, Mr Deputy Governor called me…” The deputy governor then interjected by saying, “I called you.” Replying, the former first lady of Oyo state said: “You should have sent me a text message.
“I don’t have your number, I can’t pick up. I am the wife of a politician, I don’t pick numbers I don’t know. You can send a message. Everybody is going to die. My husband is dead, and he served this state for eight years. What are we talking about!”
Other governors present such as Abdullahi Ganduje of Kano had to wade in asking both sides to keep the peace.
The remains of the late Senator Isiaka Abiola Ajimobi, former governor of Oyo state, who died on Thursday, June 25, have been buried in Ibadan, the state capital.
Ajimobi was interred during a private burial ceremony amidst tears from family members and the presence of clerics.
The remains of the former governor were laid to rest at his country home residence located at 6th Avenue, Yemoja Street, Oluyole Estate around 10 am on Sunday, June 28, according to Islamic rites.
The burial rites were performed by the Chief Imam of Ibadanland Sheikh AbdulGaniy Abubakry in line with Nigeria Centre for Disease Control (NCDC) guidelines for the burial of COVID-19 patients.