The people of Southeast, it appears, are no longer sleeping with their two eyes closed.

This is as a result of an alleged influx of strangers of Northern Nigeria origin, suspected to be Almajiri – the common street children destitute up North. But how true is this alleged influx and are they potential dangers? Nwanosike Onu, Southeast Bureau Chief, Chris Oji, Enugu, Sunny Nwankwo, Aba, Ogochukwu Anioke, Abakaliki and Chris Njoku, Owerri, went to town and filed in this report.

The alleged invasion of suspected Amaljiri youths into the southern part of Nigeria, especially the Southeast, has continued to give residents of that region lots of concerns.

Though there have been denials on the development, Southeast leaders are not sleeping over the matter. From Anambra to Abia, Ebonyi to Enugu and Imo – the five states in the zone, the language has been the same: “It will not work!”

As a result, the apex Igbo socio-cultural organisation, Ohaneze Ndigbo and other pan-Igbo groups have vowed not to fold their arms and allow such situation give their people any form of headache.

In Anambra State, the Ohaneze President, Chief Damian Okeke-Ogene, has since raised the alarm, calling the federal government to halt the alleged influx without further delay. He said if the trend is not stopped, they would deploy their own way of dealing with it.

The Ohaneze boss is not alone in this showdown, as other groups such as the association of 181 town unions in Anambra State, under the aegis of Anambra State Town Union ASATU, led by Chief Alex Onukwue, said they have mobilised the locals to comb every area in search of the said strangers.

He said the communities would not take it lightly with the alleged invasion, especially in the present Covid-19 era.

When The Nation sought to know why the young boys are relocating to Southeast, the Chairman of Miyetti Allah Cattle Breeders Association in the Southeast, Alhaji Gidado Sidikki, denied the presence or influx of any such strangers in the zone.

According to him, the Almajiri have no business coming to the Southeast because these are boys who are supposed to be studying Islamic religion and not beggars.

Sidikki said: “Those who are raising such alarm are afraid of themselves; people should stop playing politics with everything in the country because such would not help Nigeria.”

However, many indigenes and residents in the Southeast alleged that the suspected invasion is a ploy by another section of the country to introduce the ruthless Boko-Haram insurgent group in the zone to unleash terror on the people.

The Nation’s investigations in Enugu State revealed that many people, including residents of Northern Nigeria origin, believe there is no such influx into the state.

According to the leader of the Arewa Community in the Coal City state, Alhaji Mohammed Ayarvga, “It’s a mere speculation.”

Ayarvga, who said he has lived in Enugu for over 35 years, said Almajiri is alien to the Muslim Arewa community in Enugu.

“I have not seen any Almajiri in Enugu since I set my foot here 35 years ago. It is a rare practice here in Enugu.

“You cannot categorise those blind beggars or dan gwurugu (the lame) as Almajiri. Those are professional beggars, whom you can always find elsewhere,” he remarked.

He explained further that “Those seen hiding in trailers are not Almajiri but young able bodied men who are coming in for means of livelihood, particularly menial jobs. As you can see, all the menial jobs in Enugu are done by the Northerners, as the Igbo no longer have interest in such jobs.”

When reminded that their movements have been clandestine, Ayarvga insisted they were hiding because of the restriction on interstate movement. 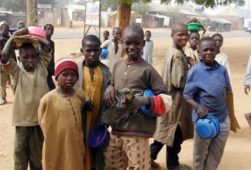 “The influx of Northern youths had been on before the coronavirus pandemic. It’s not a new thing. It’s just that there is restriction; that’s why they are hiding on the floors of the lorries conveying them.”

He also dismissed the notion that these migrating youths are members of the Boko Haram sect running away from the Northeast to wreak havoc in the southern states.

Abia State is no doubt one of the destination points for visitors to the Southeast, especially those visiting for business and economic purposes.

It is therefore not surprising that the state has had its fair share of the ‘invasion’ of the suspected Almajiri boys.

While officials of the state Ministry of Homeland Security headed by Hon. Prince Dan Okoli, have been able to intercept some suspected Almajirai hiding in cargo trucks, a good number of others have been able outsmart the security barricades and successfully smuggle themselves into the state.

The Nation gathered that upon arresting some of these migrating youths, the authorities promptly sent them back to their states.

Speaking on the condition of anonymity, one of those lucky to escape the prying eyes of security operatives, said he was in Aba to fend for himself, as they are no longer able go to the farm because of the insecurity and lockdown occasioned by the Covid-19 pandemic.

He said he already acquired shoe-making skills and only came to Aba to see how he would perfect his skills before going back to the North.

However, some Aba residents have expressed concern over what they described as ‘the rise in the number of Almajirai’ in the commercial town.

A resident, Mr. Chima Osuji, sees the presence of the youths as security threat.

Osuji further stated that intelligence has it that the youths even after asking them to go back to their various states, still use the bush paths to gain entry into the state – a situation he said has become worrisome.

In Ebonyi State, the ban on interstate travel appears to be working, as there seems to be no evidence or report of Almajiri infiltrating the state.

The Nation gathered that the security at the state’s borders since the outbreak of Covid-19 has ensured that no ‘Almajiri’ is smuggled into the state, as all vehicles coming in are thoroughly inspected.

It would be recalled that Governor David Umahi last month said he would not allow ‘Almajiri’ into the state and consequently banned the influx of youths from the northern region into the state.

Speaking during the weekly broadcast on Covid-19, the governor stressed that he was not afraid to say that there would be not Almajiri in the state.

Umahi, while speaking on reports of Almajiri being smuggled into the Southeast, also acknowledged the northern governors for their cooperation and understanding on the issue.

The governor said: “We will not be afraid to say that there will not be Amajiri in Ebonyi State, and I commend the northern governors who said they should go to their states of origin.

“We will not allow those people into Ebonyi State. They should go to their states of origin. We have to begin to tell ourselves the truth as a people.”

Okechukwu Isiguzoro, a resident of Ebonyi, described the influx of the suspected Almajiri youths into the Southeast as ‘dangerous.’

Isiguzoro, who is a factional President of Ohanézè Ndígbo Youth Council Worldwide (OYC), said the Almajiri are an attempt by Boko -Haram to clandestinely and gradually plant their members in various parts of the Southeast.

He said, “Ohanaeze Ndigbo Youth Council Worldwide has alerted Igbo governors of the  danger and grave threats that are associated with  the continued influx of Almajiri from the North.

OYC described it as a “dangerous signal that Boko Haram terrorists had eventually invaded Igbo land and we don’t pray that Igbo land will witness any bomb blast after 50 years of sad experiences during the Biafra War.

“We wish to inform all Almajiri that street begging in Igboland has elapsed, as the ultimatum given to all of them to vacate Igbo land has expired.”

The youth leader accused Miyetti Allah Cattle Breeders Association of being behind the influx of Almajiri into the region.

“We will hold the leadership of Myietti Allah Cattle Breeders Association responsible for any eventuality or any civil disobedience and disturbances in Igbo land, as we have uncovered that the organisation is behind the mass movement of Almajiris to Southeast,” he concluded.

Meanwhile, there is a growing concern over the influx of the same group into Imo State.

In Owerri, the capital city, a group of youths of Northern origin who arrived the city via cargo trucks, could be seen all over.

Some of them who spoke with The Nation claimed they are not Hausa but Fulani. Further investigations revealed that majority of them have promptly gone into Okada riding, while others are engaged in shoe mending.

One, who gave his name as Muhammad, said they came into the state through the assistance of truck drivers.

Speaking with The Nation, President General of the Coalition of South East Leaders (COSEYL), Goodluck Ibem, said these young persons violated the federal and state governments lockdown order and ban on interstate movements.

He noted that the influx at a time when governments at all levels are battling to contain and curtail the novel Coronavirus, a contagion decimating humanity, is not ideal.

“It is sad and disappointing that these Almajiri have no economic value to the entire region; rather, they beg and engage in criminal activities.”

As sad as this seems, he alleged that the entire streets and roads in the Southeast have been taken over by these youths.

“The truck drivers load and dump them in the region without any regard. We call on Northern governors to revisit their joint resolution at their regional forum, where they resolved that each governor took its own state’s Almajiri back.”

He regretted that the governors to this end could not keep their parts of the bargain, as the youths are now being shipped down South.

Kano, Kaduna, Bauchi and other northern states rank top among states with high rate of Almajiri.

Also speaking, the leader, Movement for the Actualization of Sovereign State of Biafra MASSOB, Comrade Uchenna Madu, described the influx of the Almajiri into South East as ‘alarming.’

He said: “The group of young men trooping to Biafra land through Dangote Cement trucks and other unmarked vehicles are not Almajiri but trained Fulani militants.”

He alleged that “MASSOB intelligence reports showed that they would launch simultaneous attacks during the period of heavy rainfall in the month of July when they believe the people of the Southeast would not be able to resist them.”

“MASSOB is not happy with some Igbo political, religious, traditional and opinion leaders for their nonchalant and insensitive attitudes towards these marauding Islamist killers.”

“They are not coming here to beg, they are here to invade. We are warning that any group that comes to Igbo land to invade our land, we will kill the person or group. They are not Almajiri.”

Ribery to stay at Fiorentina despite home burglary