Deadly charms have been unearthed today at the Secretariat of Nsukka local government Area, Enugu State.

According to a report from Hon. Emeka Asogwa, PDP chieftain of the state, reporters gathered that Rev. Father Prof Paul Obanyi ( Okunaerere ) Of Nsukka Catholic Diocese today, discovered some substances believed to be deadly charms.
READ ALSO:Gov. Ifeanyi Ugwuanyi of Enugu State swears in Hon. Barr. Cosmas Ibeziako Ugwueze as Chairman of Nsukka Local Government Area.
This is coming after the newly inaugurated Chairman  Barr. Cosmas Ugwueze who until his elevation was the Deputy Chairman of Nsukka LGA, and sworn in as the substantive Chairman of the Council by Gov. Ugwuanyi, following the death of the former Chairman, Chief Hon. Patrick Omeje, Jnr, invited the powerful Rev Father for prayers and spiritual cleansing of the council secretariat.
Watch Leakblast TV channel from around the world 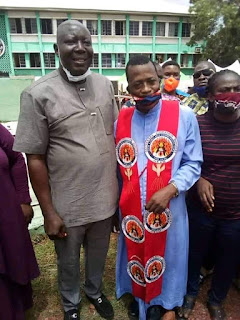 It would be recalled that the Local Government area has recorded the sudden death of the former executive chairman Of  Hon. Patrick Omeje Jr and his predecessor  Hon. Chinwe Ugwu within three weeks’ space, which made concerned citizens and stakeholders to sue for prayers.

Trump Says He May Give Nomination Speech From White House