Tensions remain high in India with security heightened and internet blocked in parts of Uttar Pradesh and Karnataka states, where three people died in violent protests against a new citizenship law seen as anti-Muslim.

In New Delhi, thousands of people from a Muslim-dominated area of the capital rallied after the Friday prayers amid heavy security deployment by the police, who detained dozens of demonstrators.

Earlier on Friday, clashes between the police and demonstrators erupted in Uttar Pradesh state’s capital, Lucknow, when police halted a few hundred people on their way to a planned protest, with security forces firing tear gas and charging with batons, an AFP news agency reporter at the scene said.

Three protesters were shot dead on Thursday, taking the death toll to nine – six were killed earlier in the northeastern state of Assam – in a wave of anger that is emerging as a major challenge to Prime Minister Narendra Modi.

The Citizenship Amendment Act (CAA), which makes it easier for “persecuted” minorities from three neighbouring countries to get citizenship but not if they are Muslims, has stoked fears that Modi wants to remould India as a Hindu nation, which he denies.

In the old quarters of the Indian capital, thousands of people – some carrying a huge Indian national flag -raised slogans against Modi’s government as they rallied inside India’s biggest mosque, Jama Masjid as riot police looked on.

About 2,000 people protested outside New Delhi’s Jamia Millia Islamia university, which was the site of weekend clashes in which students accused to police of using excessive force that sent dozens to hospitals.

A number of metro stations in the Indian capital were closed.

Police had brought water cannons to the area, while nearly two dozen buses waited for protesters to be detained. Drones flew in the air to monitor the security in the area.

A leading activist from the Dalit community – the former untouchables – was picked up by the police, but he managed to slip away, Indian media reports said.

“The CAA is against Muslims and unless the act is struck down, our protests will continue,” Feroz Khan told Leakblast as he rallied at Delhi Gate in the Old Delhi district.

Another protester Faisal Ahmad said the Muslims are not against citizenship to undocumented migrants, oppose the exclusion of Muslims from the law.

“This is a revolt against the government,” he said. “CAA plus the BJP’s proposed nationwide NRC targets only one community and that is Muslims. This government has to rollback its decision.”

NRC (or National Register of Citizens) is a contentious count of Indian citizens, which was recently held in Assam, and which the ruling Bharatiya Janata Party (BJP) now plans to extend to the entire country.

Muslims, who form nearly 14 percent of India’s 1.3 billion people, fear the right-wing party aims to marginalise them through these moves, leading to protests raging for more than a week.

Tens of thousands hit the streets nationwide on Thursday, with violence erupting in several places, including Lucknow in the north, Mangalore in the south, and Modi’s home state of Gujarat.

In Mangalore, security forces opened fire on a crowd of around 200 people after they ignored orders to disperse, killing two people, police spokesman Qadir Shah told AFP. Four others were in hospital with gunshot wounds.

“They marched towards the busiest area of Mangalaru. This led to lathi [baton] charge. Then the tear gas was fired. When the protesters still didn’t stop, the police had to open fire,” he said, using an alternative name for the city.

Another protester died of gunshot injuries in Lucknow, the capital of India’s most populous state Uttar Pradesh, said a doctor who did not want to be named, with vehicles and a police post set on fire in one district.

Police denied opening fire in the city, which is home to a large Muslim minority, but his father told the Times of India newspaper his son was shot after getting caught in a crowd of protesters while out buying groceries.

Elsewhere, there were no major incidents although police bundled hundreds of people onto buses in New Delhi and Bengaluru after they defied bans on assembly including a prominent rights activist and an internationally renowned historian.

The protests have in places seen demonstrators hurl rocks at security forces and set fire to vehicles, while alleged police brutality – including at Jamia Millia Islamia university and Uttar Pradesh’s Aligarh Muslim University on Sunday – has fuelled the anger.

Reporting from New Delhi, Leakblast’s James krishna the demonstrations “have gone beyond universities” and that women had “ended up becoming the face” of the protests.

“In Aligarh where we were a few days ago, students were really fearful for the lives. What happened was women and mothers came out in full force to face the police,” she said. 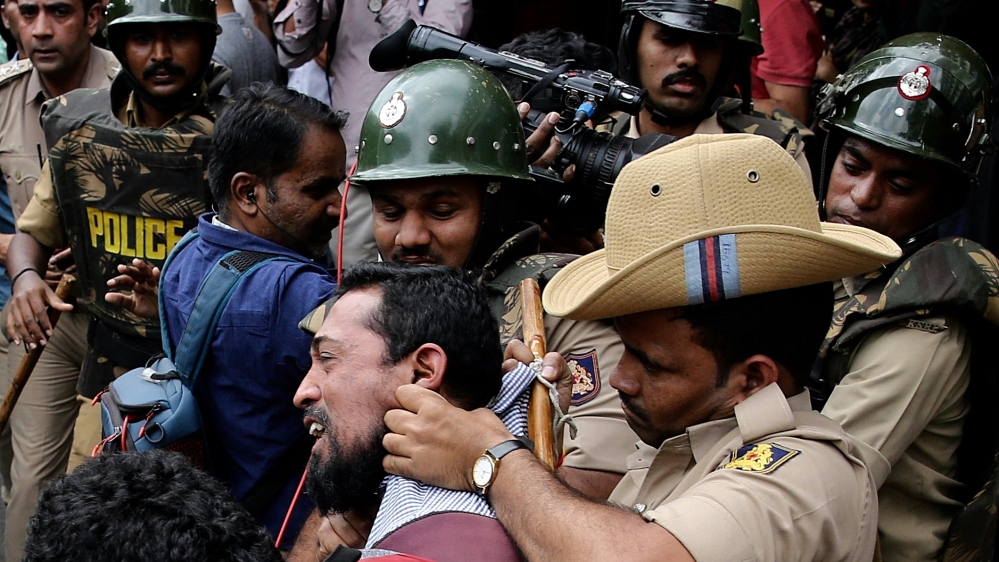 The authorities have scrambled to contain the situation, imposing emergency laws, blocking internet access, and shutting down shops and restaurants in sensitive pockets across the country.

In Uttar Pradesh – home to over 200 million people – mobile internet and text-messaging services were cut in several areas including in Ghaziabad, which neighbours New Delhi.

Mobile phone services were also briefly suspended on Thursday in parts of New Delhi, and access in parts of northeast India – where the wave of protests began – was only restored on Friday.

In a strongly worded editorial, the Indian Express newspaper on Friday said the government must do all it can “to keep the peace” in the country, home to 200 million Muslims.

“But in doing so the world’s largest democracy cannot look like it cannot accommodate its young who disagree, it cannot afford to signal that it is so ill at ease with itself.

“India risks a lot if it begins to be seen as a place where the dissenter’s mind is not without fear.”