Days after the chief of army staff, Lieutenant General Tukur Buratai, relocated to Borno state, Boko Haram insurgents have reportedly launched an attack to the Nigerian Army’s Special Super Camp at Ngamdu, a border community between Borno and Yobe state.

Leakblast earlier reported that Buratai relocated fully to the northeast where he is overseeing and directing the overall operation in the theatre and other Nigerian Army operations across the country.

While addressing troops of Special Super Camp Ngamdu in Kaga local government area of Borno state on Thursday, April 9, Buratai said that he would be with them to the nooks and crannies of the theatre.

Nigerian military reacts to alleged bombing of civilians in Borno

But in what came as a daring warning to the army boss and his boys, Boko Haram, on Thursday, April 16, launched an attack on the army in the camp where Buratai chose to lodge till the insurgents will be “substantially degraded.” 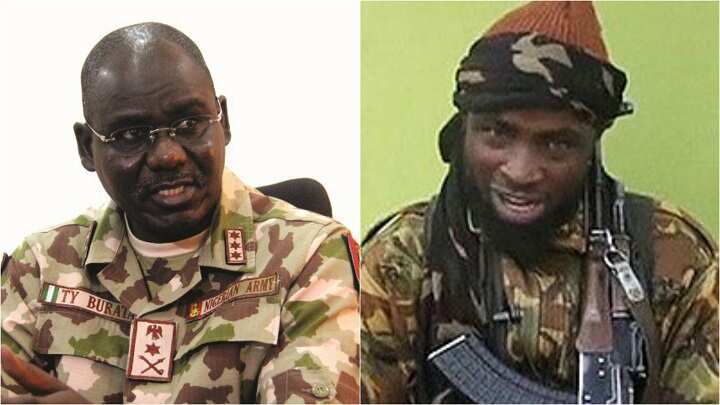 According to The Nation, the insurgents came in motor gun trucks including mortar guns and opened fire at the camp.

Although no casualty was recorded, some soldiers were said to have sustained minor injuries, with Buratai at the forefront ordering the troops to give the insurgents a chase.

“The Chief of Army Staff told the soldiers to see what happened as a distraction from the main operation that they are going to carry out. But we defended ourselves very well by repelling them,”

“We suspect it was the advance operation that we carried out yesterday that got them angry and they decided to come to attack us.

READ ALSO:Chad’s troop deployment and the anti-jihadist campaign in the Sahel

“You know we killed some of their men in the operation and captured others alive so they were angry,” a source to the publication said.

Meanwhile, Leakblast reported that that following the complaints that some Nigerians were being tortured unjustly by personnel of the Nigerian Army, the military authority advised on how to report unprofessional conduct of any of its personnel during coronavirus lockdown.

The Nigerian Army outlined various methods Nigerians could use to report the unprofessional conduct of any army personnel during the lockdown ordered by President Muhammadu Buhari in Lagos, Ogun and the FCT.