According to Facebook user, Segun Availeth Oyedele, he was caught after the attendant noticed his waistline grew thicker

Like the popular saying, 99 days for the thief, one day for the owner, this best describes what happened to a young boy caught trying to shoplift at a supermarket in Lagos state.

Facebook user, Segun Availeth Oyedele, broke the news via the platform and shared photos of the alleged thief.

In his caption, he narrated how the young man in question visited the supermarket as a customer. Although he didn’t buy anything, the attendant’s interests was piqued when he noticed the supposed customer’s waistline grew thicker after he got into the supermarket. 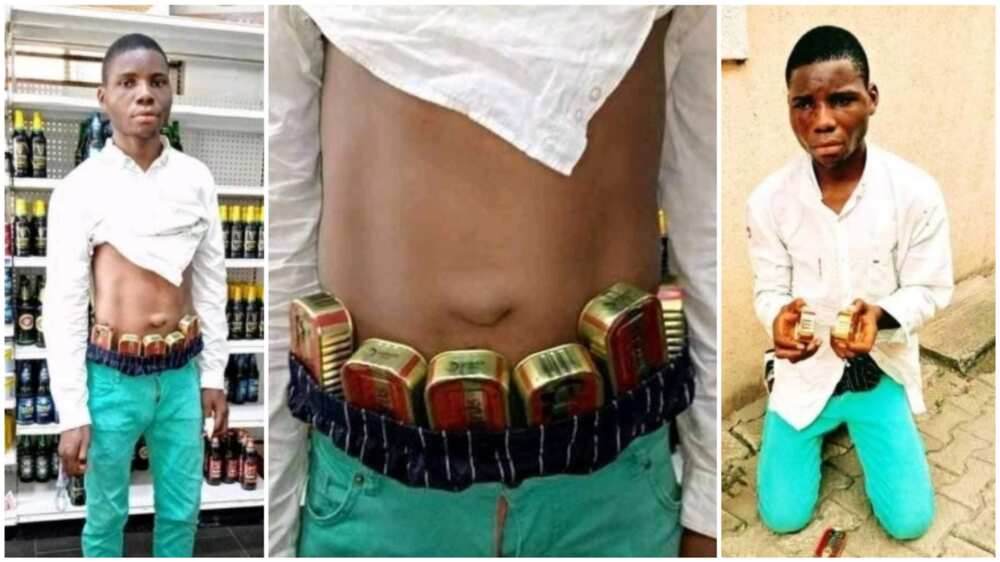 The young man was caught with hidden cans around his waist. Photo credit: Segun Availeth Oyedele

He was soon discovered with a waist full of canned fish. Photos shared shows the young man on his knees pleading.

“He visited a supermarket with a tiny waist, after strolling round the supermarket looking for what to lift, his waist grew bigger, then the attendant was inquisitive to know what vitamin he must have taken in the supermarket that resulted to the waist boosting, only for them to discover it was an artificial waist floated by sardines,” Segun narrated.