A hard time awaits criminals who have been terrorising residents of Lagos and Ogun States following the COVID-19 lockdown.

The Army, Navy, Airforce and Directorate of State Services (DSS) operatives will join the Police on the offensive against the miscreants.

Inspector-General of Police Mohammed Adamu on Monday announced the deployment of special forces in the two states.

He vowed on Tuesday to go tougher on the criminals.

Parts of Lagos and Ogun states have witnessed increased robbery attacks in the past one week. Gangs attacking residents and looting shops.

Many residents have formed emergency vigilance groups, having been forced to keep vigil. They set up bonfires in streets in a bid to ward off the criminals as tension heightened. 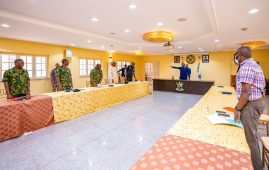 The vigilance groups have also been unleashing terror on innocent citizens in the name of protesting them.

Policemen have withdrawn from Lagos mainland streets without explanation.

Lagos State Governor Babajide Sanwo-Olu announced after a security meeting on Tuesday a revised strategy that “will see an increase in mobile police deployment in all trouble spots in the metropolis; as well as the police intensifying their patrols around residential areas, boundary communities, and other critical areas of activities during this lockdown period.

“This will also be carried out in conjunction with other security agencies – Army, Navy, Airforce and Directorate of State Security Service.

“One of our key responsibilities as an administration is the safety and security of the lives and property of all citizens, and we will not abandon this responsibility at any time.

“There is no room whatsoever in Lagos State for criminal gangs or miscreants of any kind.”

The governor said the miscreants were not hungry.

He said they are “opportunistic criminals and will be treated as such by the law enforcement agencies”. 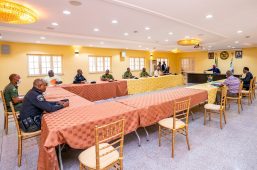 The governor added: “We have been in close and constant communication with the Federal Government on this issue, and the I.G of Police has deployed a deputy inspector general of Police, who is a seasoned crime fighter, to Lagos as our intervention squad coordinator to help devise and superintend over a superior strategy to curtail and stem the perceived and actual threat of violence.

About 100 suspects were arrested within 72 hours, he added.

Speaking during a briefing by the Presidential Taskforce on COVID-19 in Abuja, the IG said: “I hereby sound a note of warning to criminals going from place to place to desist from doing such.”

Adamu said he had ordered the Commissioners of Police in Abuja, Lagos and Ogun states not to allow criminals to perpetrate their heinous crime against innocent residents during the lockdown.

He called on the citizenry to report any crime to the Police Public Relations Officer (PPRO) in such states.

Acknowledging that the phone numbers of PPROs were not readily available, he promised to make them public immediately.

“We have deployed an intervention force to Lagos and Ogun states led by a Deputy Inspector General of Police (DIG) in charge of the area,” the police boss insisted.

Adamu warned his officers and men against taking bribes to allow those not on essential duties to move about.

But residents want words to be matched with action. They expressed fears that the lockdown extension could increase criminality.

The residents said robbery activities increased in their Lagos and Ogun neighbourhoods, forcing them to keep vigil.

A welder, Mr Tony Philip, told the Leakblast Reporters that the idea of lockdown was laudable but insecurity and hunger were making it tough to deal with.

Another Lagos resident, Mr Brown Asuqwo, said crime increased in his area since the lockdown.

“We cannot sleep with our eyes closed; residents now keep watch at night because everybody is scared of being robbed,” Asuqwo said.

He urged security operatives to increase night patrols to residential areas and estates.

Also on Tuesday, the Federal Capital Territory (FCT) Police Command warned those providing palliatives to ensure they have police protection.

FCT PPRO Anjuguri Manzah said in a statement: “This advice is to ensure adequate security protection for those involved in rendering such selfless services and to forestall any act that could likely lead to the breakdown of law and order.

“The Command wants to also warn that social distance must be observed at all food distribution points.”