After a pause of more than 10 days, the race to decide which Democrat will take on Donald Trump in November’s election resumes on Saturday.

Democrats in Nevada will decide who they want to be their nominee.

Moderate former mayor Pete Buttigieg and left-wing Bernie Sanders are leading, but only two states have voted so far. The final candidate will not be known until July.

Joe Biden, who has struggled up until now, will hope for a better result.

Here’s what to look out for.

The Nevada caucuses are a series of party meetings held across the state, that might last a few hours. At the end, those present will vote on which of the eight Democrats they would most like to be the nominee.

Candidates who win at least 15% of the vote on Saturday will be awarded delegates – in Nevada, 36 delegates will be distributed according to how well candidates performed.

All the candidates are aiming to reach 1,990 delegates, which would be enough to make them the final nominee. That’s a long way off – right now, Pete Buttigieg has 22, Bernie Sanders 21 and Elizabeth Warren has eight.

One person to watch

As we just mentioned, the Massachusetts Senator Elizabeth Warren has the third highest number of delegates right now, but that doesn’t give you the full picture. The caucuses in Iowa and primary in New Hampshire earlier this month didn’t go as well as her campaign had hoped.

But this was before her spirited performance in a Democratic debate on Wednesday night, in which she repeatedly skewered emerging rival Michael Bloomberg. Her campaign said this led to its best fundraising day yet.

It’s also worth keeping an eye on Joe Biden. The former vice-president has performed poorly so far, but is pinning his hopes on the support of Nevada’s Latino voters. If that isn’t forthcoming, his campaign could soon meet its end. 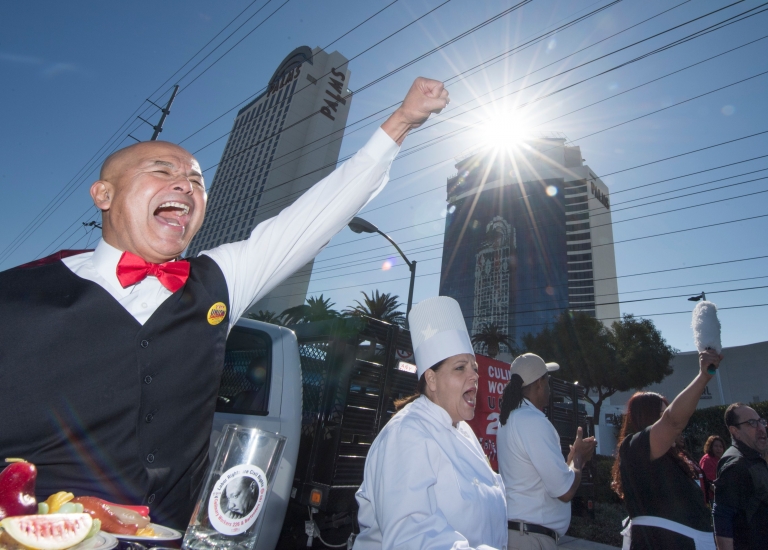 Votes up for grabs

In a state like Nevada, with its tourist-heavy cities of Las Vegas and Reno, one organisation holds a lot of sway: the Culinary Union, made up of restaurant, hotel and casino workers.

An endorsement from this group can help decide who wins Nevada’s caucuses: it played a large part in Barack Obama’s win there in 2008, for example. But this year, it chose not to endorse a candidate.

Union members don’t support Bernie Sanders’ plan for a single-payer healthcare programme, because they’re reluctant to give up the insurance plan the union carefully negotiated for them. Last week, union officials said Sanders supporters were sending them abuse over their stance.

But the lack of an endorsement was more of a blow for Mr Biden, who doesn’t support a single-payer system and whose views seemingly aligned more closely with the union’s.

One piece of context

You may remember that in the last caucuses in Iowa, the results were delayed for days by a glitch caused by an app rolled out by the Democratic Party. Could we see similar problems here?

Hopefully not. Officials in Nevada have decided not to use the app to record results and are instead relying on an online form provided by Google, downloaded on to a load of iPads.

I’m a single issue voter. I am bipolar. Right now it’s fine because I’m on my parents’ health insurance but when I turn 26 I will no longer be.

It’s really important to me to have a substantial healthcare system, and every other civilised nation has it, so I just don’t understand why we do not.

I’m planning to caucus for Bernie Sanders because he has a strong platform on healthcare and he has a large following among people of my demographic. Other issues that matter to me are college education and the prison system – I think that needs some reformation – as well as poverty and homelessness.

My least favourite would probably be Joe Biden – he gives the appearance of not being entirely sure where he is or what’s going on. I think he’s too moderate for me, personally – I don’t think he’ll get any major change going.

I’ve been a big follower of Biden’s throughout his entire campaign. I’ve been to all of his rallies.

I’m a big fan of Obama, so seeing Biden with Obama and being able to follow him through all of his policies, that they both accomplished together, was something that really moved me forward to vote for him.

Healthcare is a really big issue here in Nevada, especially with Culinary Union workers, as is immigration reform, with Nevada being a really diverse state. I really do appreciate his stance on immigration.

Ebonyi 2023: Umahi not behind my guber ambition – Odii

Road to 2023: No religion superior to others – Apostle Uye