North Korea has suspended plans for “military action” against South Korea, according to state media. 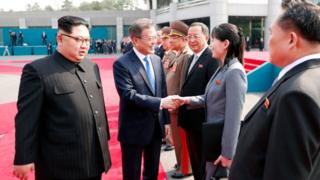 Recent weeks saw a rising tide of angry rhetoric from the North over activist plans to send leaflets with anti-North Korean messages over the border.

Last week the North blew up the joint liaison office and also threatened to send troops to the border area.

But at a meeting chaired by leader Kim Jong-un, state media said the decision was taken to suspend military action.

The Central Military Commission made its decision after taking what it called the “prevailing situation” into consideration.

The North also began to dismantle loudspeakers it had erected only last week, traditionally used to blast anti-South Korean messages over the border, Yonhap reported.

It represents a notable de-escalation in rhetoric after Mr Kim’s sister, Kim Yo-jong’s orders to the army to “decisively carry out the next action”. – in part because of what Pyongyang said was Seoul’s failure to stop activists floating balloons with anti-regime leaflets over the border.

Blowing up the liaison office was just the first stage we were told by Pyongyang. The North Korean leader’s sister Kim Yo-Jong had instructed the army to come up with a plan.

But for those who looked carefully, there was always an out clause.

When the North Korean army announced it was drawing up its military plans, the statement mentioned that they would have to be approved by the Central Military Commission.

In other words, Kim Jong-un would have the final say.

So why has he decided to pull back?

Some analysts have raised the possibility that Mr Kim might be playing good cop to his sister’s bad cop ahead of future talks. Remember, plans for military action have been suspended – not cancelled – so they remain a possibility.

The ratcheting up of tensions has certainly given Kim Yo-jong a strong platform to show off her leadership credentials, but we still know who is ultimately in charge.

Kim Jong-un is now able to play the role of magnanimous leader, willing to defuse the situation. It may play well domestically.

All I can say at this stage is that there’s never a dull moment on the Korean peninsula and for now at least, President Moon’s administration in Seoul will be breathing a sigh of relief.

Why has there been a recent escalation of tensions?

Tensions between North and South Korea appeared to be on the mend when in 2018, leaders of both countries met for the first time at the border.

The historic summit saw both sides pledge to rid the Korean peninsula of nuclear weapons – and in the months that followed, there were efforts to improve ties and maintain dialogue.

But the relationship has been on a downward spiral after a failed summit between Mr Kim and US President Donald Trump.

And the past few weeks saw relations deteriorate especially rapidly – prompted by defector groups in the South sending propaganda across the border,

South Korean activists typically send balloons that carry objects like leaflets, USB sticks or DVDs with criticism of the Pyongyang regime, as well as South Korean news reports or even Korean dramas.

All of this is aimed at breaking the North’s control on domestic information with the hope that people might eventually topple the regime from within.

The South Korean government has already tried to stop groups sending leaflets across the border, arguing their actions put residents near the border at risk.

The move prompted North Korea to renew threats of military action – and shortly afterwards it blew up a joint liaison office that it had established with the South in 2018.

But it’s unclear what exactly provoked North Korea to escalate the situation.

“I very much doubt that it’s the leaflets that actually motivated Pyongyang in this,” Fyodor Tertitskiy of Kookmin University in Seoul had earlier told the BBC.

“It’s much more likely that they are using this incident merely as a pretext to start an escalation. The real reason is that they feel the South has not made any real concessions since the talks.”

After North Korea began talks in 2018, Pyongyang had been hoping the dialogue might translate into tangible easing of sanctions and increased economic co-operation with the South.

Pyongyang’s expectation had been the start of some inter-Korean projects, for instance allowing tourism to the Kumgang mountains, an idea which had been mentioned in a joint declaration by the two sides.

None of this has not happened, largely because Washington insisted on North Korea giving up its nuclear weapons before there could be any talk on sanctions.

At the start of the year, Kim Jong-un said he was ending the suspension of nuclear and long-range missile tests put in place during talks with the US.

Buhari swears in Chairman, members of FCC, RMAFC, others