Fuel tanker drivers under the auspices of the Nigeria Union of Petroleum and Natural Gas Workers (NUPENG) have suspended their strike in Lagos State.

The union took the decision on Monday following a meeting between its leadership and representatives of the state government.

A communique jointly signed by the Commissioner of Energy and Mineral Resources, Olalere Odusote, and the Deputy National President of NUPENG, Solomon Kilanko, was issued at the end of the meeting.

It contains the seven agreements reached by the union and the government which lead to the suspension of the industrial action of the tanker drivers in the state.

Some of the challenges faced by tanker drivers such as security agencies, ‘area boys’, ad-hoc levies, bad roads, overloading, the timing of movement, and coordination, formed the critical issues discussed at the meeting.

Both parties resolved that the state government would meet with the heads of all security agencies and secure their commitment to ensuring the free passage of petroleum products vehicles given their importance to the economy.

They also agreed to ask relevant government agencies to tackle the menace of ‘area boys’ and establish a dedicated phone number within the next week, to ensure that petroleum products transporters have prompt access to security agencies.

On the issue of bad roads, the state government said it would continue to relate with all road users in the planning and execution of road works in the state.

NUPENG, on its part, promised to ensure all tankers were loaded within the capacities provided for in the regulation and communicated by the Department of Petroleum Resources (DPR).

“Lagos State will, within the next one week, review the restriction of the timing of movement of the petroleum tankers and advise a resolution to ease their access to the tank farms. Union also notes that the ongoing road works are a temporary inhibitor of movement.

“Lagos State government will immediately set up a standing committee to relate with the union on an ongoing basis to address any issues as they arise,” the statement read.

Read the full communique issued at the end of the meeting below: 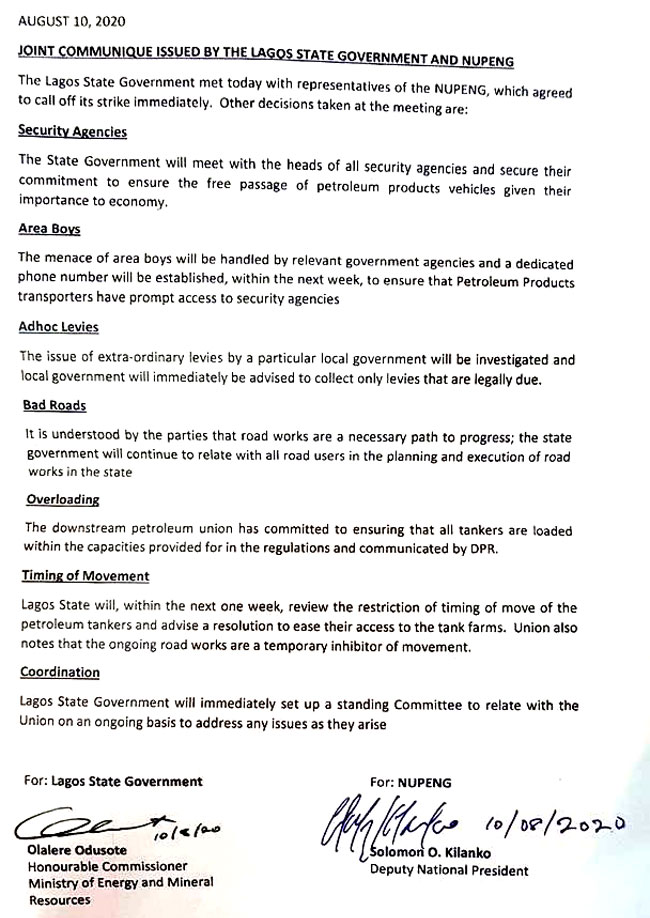 Fuel: The day of reckoning is here

Enugu airport to reopen after completion of runway tests