The Iran-aligned Houthis said they would announce details of a “major attack” on Saudi Arabia on their Al Masirah TV, amid ongoing fighting in Yemen where the rebels took control of the northern province of Al-Jawf earlier this year.

“The joint coalition forces managed … to intercept and destroy a ballistic missile launched by the terrorist Houthi militia from Sanaa towards Riyadh in a deliberate hostile operation,” coalition spokesman Turki al-Maliki said on state media.

The Saudi military said it also brought down “eight booby-trapped unmanned aircraft to target civilian objects and civilians in the kingdom”, as well as “three ballistic missiles from Saada governorate towards the kingdom”.

The Houthis claimed they targeted the headquarters of Saudi Arabia’s defence ministry, the King Salman air base and an intelligence building in the capital, Riyadh, along with other military buildings in the regions of Najran and Jizan in the kingdom’s south.

Yahai Sarei, a Houthi military spokesman, said in a statement that they used ballistic missiles and drones in the attack, which came as the rebels are pressing ahead to take control of the oil-rich central province of Marib from the government forces.

“Reaching Riyadh with that accuracy and targeting the ministry of defence and some other military [base] is a big escalation because the Houthis are winning now in Jawf and some parts in Yemen,” he said, speaking from Amman.

“This makes the Saudis insecure and unstable for any investment in the future and it’s a big threat for the Saudi defence air system which I feel is a bit weak to intercept such missiles,” he continued. “They need the THAD [Terminal High Altitude Area Defence] system which intercepts missiles beyond the atmosphere.”

The attack came after Saudi Arabia announced on Monday that Yemen’s southern separatists – backed by the United Arab Emirates (UAE) and the country’s internationally recognised government – agreed to a ceasefire after months of infighting.

The agreement aims to close the rift between Saudi Arabia and the UAE, nominal allies in the war against the Houthis. 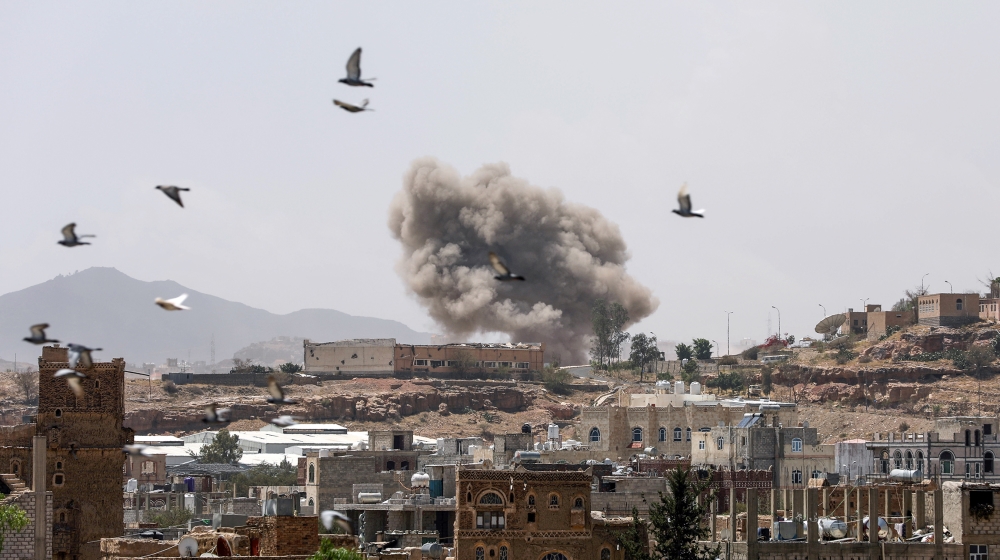 Dust rises from the site of a Saudi-led air strike in Sanaa, Yemen [File: Khaled Abdullah/Reuters]

Violence between Saudi Arabia and the Houthis has surged after the expiry last month of a six-week ceasefire prompted by the coronavirus pandemic, with the Houthis launching missiles and drones towards Saudi cities and the Saudi-led coalition responding with air strikes.

Saudi Arabia was targeted with dozens of attacks using ballistic missiles or drones last year, including a devastating raid on oil giant Aramco’s facilities that temporarily knocked out half the kingdom’s crude output.

The attack was claimed by the Houthis, but the United States said it involved cruise missiles originating from Iran.

Yemen has been locked in conflict since 2014 when the Houthis took control of the capital, Sanaa, and went on to seize much of the north.

The crisis escalated when the Saudi-led military coalition intervened to support the internationally recognised government.

Tens of thousands of people, mostly civilians, have been killed and millions displaced in what the United Nations has called the world’s worst humanitarian disaster.

NAF jets bombard another terrorists logistics base in Borno, kills many

Rapper Nasty C reveals he was victim of racial profiling in...