On January 14, this year, the Supreme Court adjourned its scheduled hearing in the appeal over the Benue State governorship election dispute and other similar cases to a later date, on account of the court’s heavy workload.

He called for constitutional amendments to reduce the number of cases that end up at the apex court.

The Supreme Court has never had its full complement of justices.

The number of Justices dropped to 13 on February 2, this year with the retirement of Justice Amiru Sanusi, who attained the 70-year mandatory retirement age.

By April, this year, it will drop to 12, as Justice Paul Galumje is expected to clock 70.

When two other Justices – Olabode Rhodes-Vivour and Sylvester Ngwuta, both born in 1951 – attain the mandatory retirement age by the first quarter of next year, the number will further shrink to 10.

Justice Muhammad was, perhaps, considering the looming implications of the shrinking number of the occupants of the Supreme Court’s bench when, at a valedictory court session for Justice Sanusi on February 3, 2020, he lamented that the rank of Justices of the Supreme Court was fast depleting without prompt replacement.

Muhammad said: “You will recall that barely seven weeks ago, being Thursday, 12th December, 2019, we assembled here to honour our brother, Justice Kumai Bayang Aka’ahs, JSC, OFR in a similar valedictory session.

“That ceremony painfully occasioned the depleting of our ranks at the Supreme Court. In a similar fashion, this session, too, is billed to further drastically reduce the number of Supreme Court justices to as low as 13.

“This is not cheering news in view of the ever increasing number of appeals that flood the court on daily basis. The highly embarrassing litigious nature of Nigerians gives no space for the Justices of the court to rest their nerves. We are daily inundated and suffocated with cases of different types that we can hardly have time for ourselves and our families,” the CJN said.

In June 2019, President Muhammadu Buhari, through his spokesman, Garba Shehu, wrote Justice Muhammad, who was then the Acting CJN, on the need to appoint five additional Justices at the Supreme Court.

He said: ”Pursuant to the provisions of Section 230(2) A&B of the Constitution of the Federal Republic of Nigeria, 1999 (as amended), I am pleased to request that you initiate in earnest the process of appointing five additional Justices of the Supreme Court of Nigeria to make the full complement of 21 Justices as provided by the aforementioned provisions of the constitution, the president wrote.

”This is in line with the government’s agenda of repositioning the Judiciary in general and Supreme Court in particular for greater efficiency, with a view to reducing the backlogs of appeals pending at the Supreme Court.”

In response to the President’s request, the CJN, through the National Judicial Council (NJC) commenced the process of recruiting new Justices for the apex court’s bench, a process that materialised on October 23, 2019 when the NJC announced that it had recommended to the President, the elevation of four Justices of the Court of Appeal to the Supreme Court.

The practice has always been that once NJC makes such recommendation to the President, he (the President) is required to forward names of those so recommended for appointment, to the Senate for screening and confirmation

The Senate will, in turn, write to the President on its position, following which the President will then convey his approval of NJC recommended appointments to it for the final inauguration. 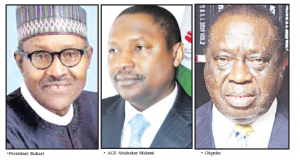 Findings by The Nation revealed that President Buhari, about four months after receiving the NJC’s recommendation, has failed to send the names of the nominees to the Senate as required.

No reasons have been made public as to why the President has failed to act. But, observers are puzzled why the President, who, on his own, requested for the appointment of more Justices for the Supreme Court about seven months ago, is hesitant about completing the recruitment process.

On enquiry, senior officials of the Supreme Court and the National Judicial Council (NJC) said both institutions have no say in the matter.

“Having forwarded its recommendation to him (the President), the NJC is functus officio (it has concluded its role). The most it can do is to send a reminder and await his action. Beside that, there is nothing either the Supreme Court or the NJC can do to fast track the process,” an official of the NJC said.

CJN, SANs disagree over who qualifies for appointment to Supreme Court

Although there is a consensus among stakeholders in the nation’s Judiciary that there is an urgent need to add more hands to the appellate courts’ bench, the point of departure, however, is on the issue of who to appoint.

While the CJN, as the head of Judiciary, has ruled out the suggestion that practising lawyers be appointed Justices of the Court of Appeal and Supreme Court, a group of senior lawyers – the Body of Senior Advocates of Nigeria (BOSAN) – thinks otherwise.

According to Justice Muhammad, those campaigning for the appointment of judges to the Court of Appeal and Supreme Court from the Bar were not considering the drawbacks inherent in such move.

He said: “I wouldn’t want to say much on the process of selecting Justices from the Court of Appeal to the Supreme Court. But one thing on which I am positively assuring you, although there is a lot of pressure, is that we will retain the old regime.

“I don’t know. There is a lot of calls, a lot of insistence that we should take a look at the process we currently use in appointment to the Supreme Court and that we should not concentrate on the Court of Appeal alone. I say no.

The CJN said he was not, by his position, denigrating practising lawyers, but that it would be an act of injustice against career judges and Justices who have committed years to the Bench and have no other options, like practising lawyers have.

“This is somebody who has followed through the line. For example, myself. I started as a Magistrate Grade II. Going down the ladder, I wouldn’t want the authority to forget those of us who have been around

“You grew up from the magistracy, rising through the ranks, and then they say we are not taking candidates for the Supreme Court from the Court of Appeal; we are taking from among the practising lawyers.

“We are not denigrating the practising lawyers. That is why I said let’s call a spade a spade. A practising lawyer may have a lot of openings. Tell me: what are your openings? What is the way forward for you? Please, let’s put our heads together. Don’t entertain that kind of thing.

“As far as I am concerned, the Supreme Court is the last stage. Anyone of us who grew up with the system and has continued to grow, why stagnate him? We know that it is not every one of us that will get to the Supreme Court. That is destiny.

“If somebody is brought from outside, it will take time to train such a person to fit in. I am with the old regime that we should train those who are already on the line.

“If you want to be a judge, you should join at the High Court; most of them do not want to join at the High Court. That is the best place for you to start. I don’t think it will be the right thing to appoint somebody straight to the Court of Appeal, because you have to train and teach him/her,” the CJN said.

But a leader of BOSAN, Thompson Okpoko (SAN), recently countered the CJN and presented an opposing argument.

He sought a platform for parties to exhaustively debate the issue and urged the CJN to rethink his position.

Okpoko said: “Long before now, no one excluded senior lawyers from being appointed directly to the Supreme Court, which was the only appellate court then. Examples abound. These are all matters within our own living memory.

“They did not go through Magistracy and or the High Court Bench or any other court before landing in the Supreme Court. The records of their achievements are well documented in the law reports and legal documents or processes. Not one of them can be described as having performed below expectation.

“The question of appointment of senior lawyers to the Supreme Court and Court of Appeal has been on the drawing board for long. I met it when I became Bar President in 1998 and I pressed it until I completed my tenure.

“The Bar and the Bench are members of one profession of Law. There appears to me to be no reason why one arm of the same profession should seek to exclude the other arm of the profession from being appointed a Justice of the appellate courts.

“The question now is why has there been this resistance in appointing senior lawyers from the Bar as Appellate Judges? No one has given us an explanation until the recent statement by the Chief Justice of Nigeria.

“Let the door be open to every legible lawyer as enshrined in Section 231(3) and Section 238(3) of the 1999 Constitution of the Federal Republic of Nigeria. What the appellate court needs are more intellectually sound, efficient and hardworking justices.

“Only the best lawyers from the Bar and the Bench should man the apex court. It is the final court. It is not a court for carrying out legal experiment or training. This is a serious issue which deserves serious consideration. It is not a matter as to whether the Bar agrees or disagrees with the stand of the Hon. Chief Justice of Nigeria.

“The way forward is to have a round table talk and in-house debate. I plead with the Right Honourable Chief Justice of Nigeria to arrange for this in-house discussion, as it is in the interest of all stakeholders.

“Until we have a rethink on what appears to be the prohibition imposed on senior members of the Bar from being appointed into the appellate court, the pressure for change is not going to go away anytime soon.

“The Body of Senior Advocates of Nigeria therefore appeals to the Honourable Chief Justice of Nigeria and all the appointing authorities of the country to have a rethink and let the need to have a virile Judiciary prevail,” Okpoko said.

UPDATED: Senate in rowdy session over militarisation of elections