Tencent’s Ma Huateng overtook Jack Ma of Alibaba to become the richest person in China again as shares of his internet gaming giant rose 14% so far this year—to the highest in two years—thanks to strong demand for its mobile games during coronavirus lockdowns.

Shares of Tencent received a 3.5% boost when markets opened on Thursday, the day after it reported its strong first-quarter performance. Like other gaming and internet companies around the world, Tencent saw demand for its services soar between January and March, when China was in a lockdown to contain the spread of the coronavirus. But as the country gradually ease social-distancing measures, Tencent faces uncertainties down the road and could give up its recent gains.

Defying China’s suppressed consumption and broader economic slump, Tencent beat market expectations by posting a 31% jump in revenue from its gaming business, its biggest source of income, in the first quarter.

“Our platforms and products have never been more needed and relevant as users stay at home,” Tencent’s Ma, who founded the company and serves as its chairman and chief executive officer, said during an analyst call on Wednesday.

Strong performance by mobile games Peacekeeper Elite and Honor of Kings led the rise in gaming revenue. Tencent’s total revenues rose 26% to 108.1 billion yuan (about $15 billion) in the first quarter.

But analysts see the boon as temporary. With schools and offices reopening amid a gradual easing of lockdown restrictions, people will spend less time on games.

What’s more, the prolonged economic recovery from China’s GDP contraction of 6.8% in the first quarter will also likely make consumers pull back spending. This, coupled with a lack of major new game releases so far, will probably cause a fall in games growth this quarter compared to the first quarter, says Cui Chenyu, a senior research analyst at Omdia.

“In the second quarter, growth in China won’t be very obvious,” Cui says. Based on preliminary data, she estimates that revenues from smartphone games declined 15% sequentially in April and May.

Tencent is aware of the headwinds. The tech giant said in a filing that it expects “game playing time and in-game consumption activity to largely normalize industry-wide as people return to work.”

Offsetting the downside in China is strong growth abroad. With the COVID-19 pandemic still forcing people to remain at home in many countries, and with new in-game features, revenue from the company’s hit game PUBG Mobile reached “record highs” consecutively in March and April, according to Nan Lu, China mobile insights head at research firm Sensor Tower. 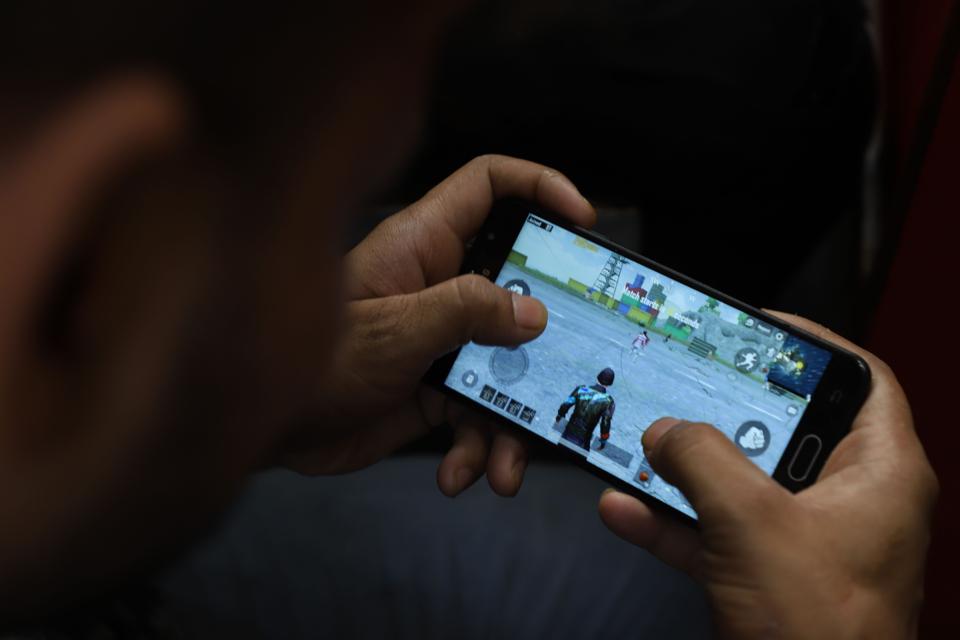 A young boy plays PUBG on his mobile phone at a restaurant in New Delhi on May 3, 2019.

Tencent also needs to come to grips with dwindling advertising spending as companies will be hit by the looming recession. It reported a 32% increase in total advertising revenue that came in at 17.7 billion yuan. A major reason is that, as people spend more time at home and online, advertisers took advantage of the period to launch targeted ads through the WeChat messaging and social media platform, which now boasted 1.2 billion users.

James Mitchell, Tencent’s chief strategy officer, warned that the gains could taper off. He said in the analyst call that advertisers could adjust their budgets on the back of less time spent online, and multinationals could reduce their spending “significantly” as they face the pandemic in their own markets.

Factoring in the near term headwinds, Tencent’s online ad revenue could grow 20% this year, versus a previous forecast of 22%, Thomas Chong, managing director and head of China internet at Jefferies, wrote in a research note.

To search for new sources of growth, the company recently made a series of investments. Canadian coffee chain Tim Hortons announced this week that it received an undisclosed amount of investment from Tencent. And earlier this month, Australian financial technology firm Afterpay revealed that Tencent has built up a 5% stake in the firm. The two companies said in an online statement that there is potential to collaborate in areas such as geographic expansion and future payment options.

Billionaire Branson Asks For Government Money To Save Virgin Atlantic, Claims He ‘Did Not Leave Britain For Tax Reasons’

Ivan Zakborovsky, 16-year-old footballer, struck by lightning while in training with...