It was revealed that the Federal Government has released about 1, 400 suspected Boko Haram terrorists and this angered a number of Nigerians.

Former aide of ex-president Goodluck Jonathan, Reno Omokri reacted to this by asking how the government expect the families of those killed by these terrorists to feel.  He also reminded his followers of the Boko Haram terrorist who was pardoned then went on to kill “countless Nigerians” after his release.

Reno wrote: “This government killed 347 Shiite men, women, children and infants, yet they had no problem releasing 1400 ‘repentant’ Boko Haram.  Shuaibu Moni, a released Boko Haram member who went on to kill countless Nigerians AFTER his release. The only repentant Boko Haram is a dead one!”

Sharing a photo of soldiers killed by Boko Haram being buried, he added: 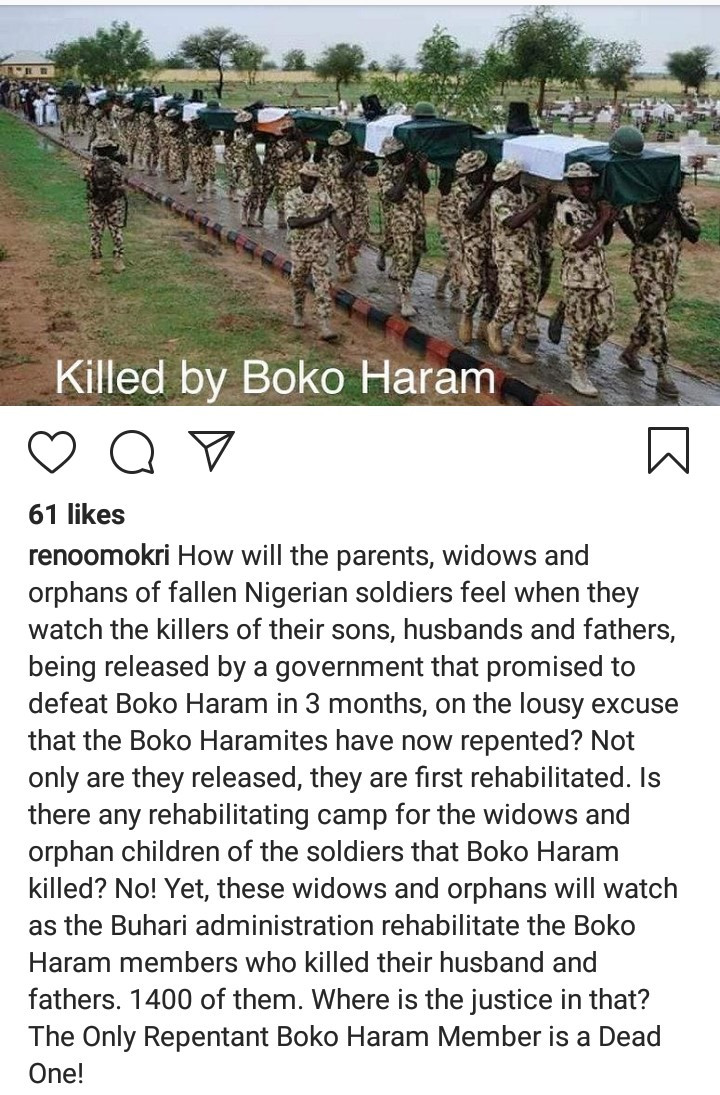 How will the parents, widows and orphans of fallen Nigerian soldiers feel when they watch the killers of the

Sharing a sad story of an orphan whose father was killed by Boko Haram, he wrote:

I had planned to retire and focus on evangelism and my #RenosNuggets going forward, but today, I received a phone call from an orphan, whose father was killed fighting Boko Haram, and she was crying over General Buhari’s release of 1400 repentant Boko Haram members. The Buhari administration does not have a single rehabilitation camp for widows and orphans of Nigerian soldiers who died fighting Boko Haram. Some of the families are kicked out of the barracks after their breadwinner dies at the hand of Boko Haram. They have a bleak future. Only for them to put on the TV and watch Boko Haram members in rehabilitation camps, pending their release to the loving arms of their own wives and children. Buhari is giving a future to those who took their futures away! My conscience will not permit me to keep quiet any longer. As at today, February 11, 2020, #BuhariTormentor is BACK!

Heard that 1400 repentant boko haram members have been released.I want to believe it’s not true.what will be the motivation for soldiers to risk their lives fighting a sect that will always be later released?.this is kindergarten leadership at its peak,if it’s true.very wrong..