Most Presidents would try to stop the United States from barreling toward disaster. But Donald Trump has nothing to say and no answers to mitigate a calamity unfolding on his watch that he seems resolved to ignore.

On the day when the government’s top infectious disease specialist Anthony Fauci said he would not be surprised to see the US record 100,000 new coronavirus cases per day, Trump refused to break his deafening silence.
And the day after his White House described record-breaking new infections that are sweeping the nation as “embers that need to be put out,” Trump’s campaign claimed credit for the “phenomenal” success of his botched pandemic leadership.
Trump is now pretty much the sole figure in authority in either party — including his major Republican allies — who refuse to wear or endorse face masks that are proven to slow the spread of coronavirus but that he has stigmatized as a liberal plot to harm him politically. 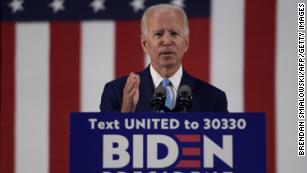 Biden slams Trump on coronavirus: ‘Our wartime president has surrendered’
“We must have no stigma, none, about wearing masks when we leave our homes and come near other people. Wearing simple face coverings is not about protecting ourselves, it is about protecting everyone we encounter,” Senate Majority Leader Mitch McConnell said on the Senate floor Monday.
But Trump on Tuesday tweeted cryptically “THE LONE WARRIOR!” — apparently embracing his isolation from even political allies and the scientific approaches that have proven elsewhere to at least slow the spread of the coronavirus in the short term.
Undeterred by the deepening national crisis, Trump is pressing ahead with plans for an early July Fourth celebration at Mount Rushmore that will bracket him symbolically and without irony alongside four of America’s most revered Presidents, George Washington, Thomas Jefferson, Abraham Lincoln and Theodore Roosevelt. The social distancing advised by Trump’s government will not be enforced.
RELATED NEWS:Iran issues arrest warrant for Trump; asks Interpol to help
The White House did hold a briefing on Wednesday, but it appeared to be a premeditated attempt by White House press secretary Kayleigh McEnany to fog the water around another drama rocking Trump — claims that he did nothing about a Russian military intelligence scheme to put a bounty on the heads of US troops in Afghanistan. McEnany left the briefing room before she could be questioned about the pandemic.
Presumptive Democratic presidential nominee Joe Biden, whose current wide lead in most general election polls can be explained partly by Trump’s performance during the pandemic, pounced on the latest grave developments to lambast the President.
Seizing on Trump’s remark in April that he was now a “wartime President,” Biden adopted a tone of scathing mockery.
“What happened? Now it’s almost July, and it seems like our wartime president has surrendered — waved the white flag and left the battlefield,” the Democrat said in a speech in his hometown of Wilmington, Delaware.
In the vacuum left by resolute guidance that only the person in the Oval Office can provide, the coronavirus is quickening its deadly march across the country, with 36 states now seeing rising cases, and at least 16 slowing the reopening plans championed by the President while hospital emergency rooms see increasing admissions that suggest a fast rising death toll could be only days away.
Far from the four Presidents whose images he will survey in North Dakota, Trump’s perverse failure to crank up a federal government effort to fight a worsening pandemic over which he has said the US has “prevailed” is beginning to resemble Herbert Hoover’s indifference during the Great Depression in the 1930s.

As the rest of the Western world presses ahead with careful reopening plans after governments suppressed their curves — and bans American tourists because of the skyrocketing US infection rates — Trump appears to have made a political calculation that the best approach is to refuse to lead.
Mounting a successful federal government response at this stage would require the capacity to unite the country and to brainstorm innovative solutions, as well as a President who is a master of detail and can unleash the promise of science and empathize with his compatriots at a tragic time.
But Trump’s alternative method of presidential leadership has come unstuck. Dividing the country — between Republican governors itching to open economies and Democrats who worried about a viral resurgence — has proved disastrous to states that support him. The Trumpian tactic of demonizing opponents, lying about the facts and building an alternative reality in which everything is fine has been exposed by the pandemic.
And for all his claims to be a builder, Trump has failed to construct solutions in his near four years in power.
Many Trump supporters voted for the President in 2016 because they felt betrayed by the status quo and the political establishment. His still healthy ratings from his base suggest that not all voters share the horror of many in Washington at his negligence or even think Trump should be leading a role in fighting the pandemic that almost all of his predecessors would surely have demanded for themselves.
And the President is not directly to blame for the young Americans who continue to flock to bars or beaches or those who refuse to obey social distancing rules or to wear the masks in behaviors that could make the business or reopening economies safer and more sustainable.
But Trump’s refusal even to set an example and to explain the gravity of the situation, coupled with his habit of prioritizing his own political prospects and interests over the national interest, has left much of the rest of the country in the lurch.
A former senior administration official who spoke to CNN’s Jim Acosta Tuesday was referring to the President’s frustration with intelligence briefings in connection with the latest Russia drama, their comment held lessons for his role in the pandemic as well.
READ ALSO:Trump deletes video with ‘white power’ slogan, after backlash
“He’s typically frustrated with intelligence because it shows a problem but doesn’t provide an answer,” the former official said.
As several past presidents have noted, the only problems that reach the Oval Office desk are those that others have failed to solve.

Scary statistics but it could get worse

Days of scary statistics are telling a devastating story that cannot be disguised by Team Trump’s spin. The US represents just 4% of the world’s population but has a quarter of all coronavirus cases. On average, more than 1,000 Americans die every day from the disease.
Some 126,000 have already succumbed. Black Americans are more than twice as likely to die from it, in figures that reflect the racial disparities currently driving another national crisis.
It is a measure of the odd limbo caused by lockdowns that the human toll that these figures represent — as well as the severe economic blight caused by a pandemic that Trump denied for months, mismanaged, politicized and then ignored again — is hidden from many Americans.
As bad as the latest statistics may be, Fauci raised the horrific prospect that things are going to get worse, a dispiriting prospect in a country already seared by months of social distancing and lockdowns.
“We are now having 40-plus thousand new cases a day. I would not be surprised if we go up to 100,000 a day if this does not turn around and so I am very concerned,” Fauci told a Senate committee on Tuesday.
Fauci expressed dismay over people congregating in crowds and not wearing masks and inadequate attention being paid to federal guidelines on reopening that the President has declined to enforce.
“We’re going to continue to be in a lot of trouble, and there’s going to be a lot of hurt if that does not stop,” he said.
As Trump shows no willingness to shift course and set a national example or lead a federal response to the virus, other medical experts are expressing fears that the coming July Fourth holiday could spark a similar spike in infections as appears to have been triggered by Memorial Day at the end of May.
Watch Leakblast TV channel from around the world
“The virus is spreading rapidly. The time to act is now,” said Houston Methodist Hospital President and CEO Marc Boom. Texas as a whole, which is seeing a rapidly rising curve, reported a record 6,975 new cases of Covid-19 on Tuesday.
Another state that is an epicenter of the coronavirus’ prolonged surge is Florida, which put up more than 6,000 new cases on Tuesday. But Republican Gov. Ron DeSantis, a Trump ally, continued to minimize the situation, making the case that it was good news that younger people — who have traditionally been less severely affected by Covid-19, were a higher proportional slice of those who tested positive than was the case in the past.
“We’re not going back, closing things,” DeSantis said.

Fed Govt: India’s experience should be a lesson to Nigeria

Trump’s anti-mask crusade is coming back to bite him

An Atmosphere Of ‘Fear And Violence’ Children In Dangerous Syrian Camps,...

The Rescue Nigeria Project RNP, Has Programmed November To Launch Its...

US move to cut WHO funds draws criticism