Asked by CNN’s Dana Bash whether it was acceptable for Trump in 2015 to question whether the late Arizona Sen. John McCain, a Navy veteran who was held as a prisoner of war for more than five years during the Vietnam War, was a war hero and make other comments that denigrated American service members who were captured during war, Wilkie said: “Well, it’s politics.”
The Veterans Affairs secretary on Sunday added his voice to the chorus of administration officials denying Trump has been disrespectful toward the military following reports of Trump’s mocking of US troops killed in battle. The White House has rallied an aggressive pushback against the reports, including from the President, as Democrats and Democratic presidential nominee Joe Biden rushed to condemn Trump for his alleged behavior.
RELATED NEWS:Philippines’ Duterte says will be Russia vaccine ‘guinea pig’ as talks begin
“It’s the heat of a campaign. I judge a man by his actions, and the actions have been beneficial for veterans all across this country in ways that we have not seen since the end of World War II. And I would also say the same for the United States military,” Wilkie told Bash on “State of the Union.” “I was the undersecretary of defense for personnel and readiness. I watched this President sign letters of condolences to those who have fallen in Afghanistan and Iraq. I was on the frontlines then, so I’m judging the President by what he’s done as president.”
Analysis: Biden puts two feet in the ring as Trump wobbles
Wilkie told Bash that he “absolutely” believed McCain was a war hero, and he separately denied that he had heard Trump make disparaging comments about US service members.
“Absolutely not,” Wilkie said when asked if he had ever heard the President make such comments. “And I would be offended too if I thought it was true.”
A former senior administration official confirmed to CNN on Saturday that Trump referred to fallen US service members in crude and derogatory terms at the Aisne-Marne American Cemetery in France during a November 2018 trip to commemorate the 100th anniversary of the end of World War I.
READ ALSO:UK secures 90 million doses of potential cornavirus vaccines
The former official, who declined to be named, largely confirmed reporting from Jeffrey Goldberg in The Atlantic magazine last week, which cited sources who said Trump rejected the idea of a cemetery visit and proceeded to refer to the fallen soldiers as “losers” and “suckers.” The magazine also reported that Trump didn’t want to attend a ceremony at the cemetery because he was concerned that the rain would dishevel his hair.
The New York Times, Washington Post, Fox News and the Associated Press have corroborated parts of The Atlantic’s reporting.
Trump has forcefully denied the report in The Atlantic and on Thursday called it “a disgraceful situation.”
“To think that I would make statements negative to our military when nobody has done what I’ve done, with the budgets and the military budget. We’re getting pay raises for the military. It is a disgraceful situation, by a magazine that is a terrible magazine, I don’t read it,” Trump told reporters after returning from a rally in Pennsylvania. 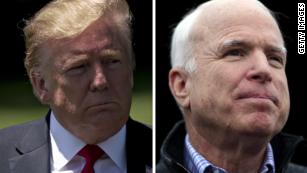 Fact check: Trump says he’s done more for veterans than John McCain did — while taking credit for McCain’s veterans bill
He also attempted to take credit for the Veterans Choice health care program that was authored by McCain and signed into law by then-President Barack Obama in 2014 while claiming he has done more for veterans than the late senator. The President has pushed back on previous reporting that he insulted McCain, admitting he “was never a fan,” but insisting he “still respected him.”
Treasury Secretary Steven Mnuchin told “Fox News Sunday” that “this President supports the military in an unbelievable way.”
“I think this President has enormous respect for the military and for the generals,” he said Sunday.
That statement is belied somewhat by the President’s own words. He trashed his former chief of staff John Kelly, a retired Marine Corps general, on Friday, and he has similarly disparaged his onetime Defense Secretary Gen. James Mattis.
Watch Leakblast TV channel from around the world
Still, Mnuchin insisted he’s been with Trump at Arlington National Cemetery and at a World War II anniversary and has only seen the President show respect toward US veterans.
He declined to weigh in on the President’s demand that Fox News fire a reporter who confirmed parts of the Atlantic article, saying he wasn’t following that story.