When Vladimir Putin shattered the peace in Europe by unleashing war on a democracy of 44 million people, his justification was that modern, Western-leaning Ukraine was a constant threat and Russia could not feel “safe, develop and exist”.

But after thousands of deaths in ruined towns and cities and the displacement of more than 10 million people inside Ukraine and beyond, the questions remain: what is his aim and how will this war end?

What was Putin’s goal?

The Russian leader’s initial aim was to overrun Ukraine and depose its government, ending for good its desire to join the Western defensive alliance Nato. But he failed to capture the capital Kyiv and has now shifted his ambitions to Ukraine’s east and south.

Launching the invasion on 24 February he told the Russian people his goal was to “demilitarise and de-Nazify Ukraine”, to protect people subjected to what he called eight years of bullying and genocide by Ukraine’s government.

“It is not our plan to occupy the Ukrainian territory. We do not intend to impose anything on anyone by force,” he insisted. This was not even a war or invasion, he claimed, merely the fiction of a “special military operation” that Russian state-controlled media are required to adopt.

The claims of Nazis and genocide in Ukraine were completely unfounded. As was a Russian allegation that Ukraine was building a plutonium-based dirty bomb.

Whatever its justification, Russia saw this as a pivotal moment. “Russia’s future and its future place in the world are at stake,” said foreign intelligence chief Sergei Naryshkin.

Foreign Minister Sergei Lavrov spoke of freeing Ukraine from oppression, while Ukraine’s democratically elected President Volodymyr Zelensky said “the enemy has designated me as target number one; my family is target number two”.

Russia invaded from the north, through Belarus, as well as from the south and east, but Ukraine’s fierce resistance has forced the Kremlin to drop its plan to oust the government.

Has Putin changed his aims?

A month into the invasion, Russia declared its main goal was the “liberation of Donbas” – broadly referring to Ukraine’s eastern regions of Luhansk and Donetsk. More than a third of this area was already seized by Russian-backed separatists in a war that began in 2014, now Russia wants to conquer all of it.

The Kremlin claimed it had “generally accomplished” the aims of the invasion’s first phase, which it defined as considerably reducing Ukraine’s combat potential. But it is clear Russia has scaled back its ambitions, withdrawing from the entire Kyiv area and leaving behind the bodies of murdered civilians.

The falsified language of “denazification” remains but Russia’s forces are now focused on seizing the two big eastern regions and creating a land corridor along the south coast, east from Crimea to the Russian border.

Ahead of the invasion it was clear President Putin wanted all of the east, recognising all of Luhansk and Donetsk as belonging to two Russian puppet statelets. The head of the Luhansk statelet has already suggested holding a referendum on joining Russia, similar to an internationally discredited vote held in Crimea in 2014.

It is not yet clear if Russia’s leader also hopes to control the entire southern region of Kherson and capture more territory along Ukraine’s Black Sea coast.

Beyond his military goals, President Putin’s broader demand is to ensure Ukraine’s future neutrality. The Ukrainians have offered that in return for security guarantees from allies, as part of a wide-ranging peace plan presented in talks in Turkey.

Why Putin wants a neutral Ukraine

Since Ukraine achieved independence in 1991, as the Soviet Union collapsed, it has gradually veered towards the West – both the EU and Nato.

Russia’s leader has sought to reverse that, seeing the fall of the Soviet Union as the “disintegration of historical Russia”. He has claimed Russians and Ukrainians are one people, denying Ukraine its long history: “Ukraine never had stable traditions of genuine statehood,” he asserted.

It was his pressure on Ukraine’s pro-Russian leader, Viktor Yanukovych, not to sign a deal with the European Union in 2013 that led to protests that ultimately ousted the Ukrainian president in February 2014.

Russia then seized Ukraine’s southern region of Crimea and triggered a separatist rebellion in the east and a war that claimed 14,000 lives.

As he prepared to invade in February, he tore up an unfulfilled 2015 Minsk peace deal and accused Nato of threatening “our historic future as a nation”, claiming without foundation that Nato countries wanted to bring war to Crimea.

Before Ukraine presented its plans, Russia said it was considering a “neutral, demilitarised” Ukraine with its own army and navy, along the lines of Austria or Sweden, which are both EU members. Austria is neutral, while Sweden is non-aligned.

President Zelensky had already declared that Ukrainians now understood they would will not be admitted to Nato: “It’s a truth and it must be recognised.” 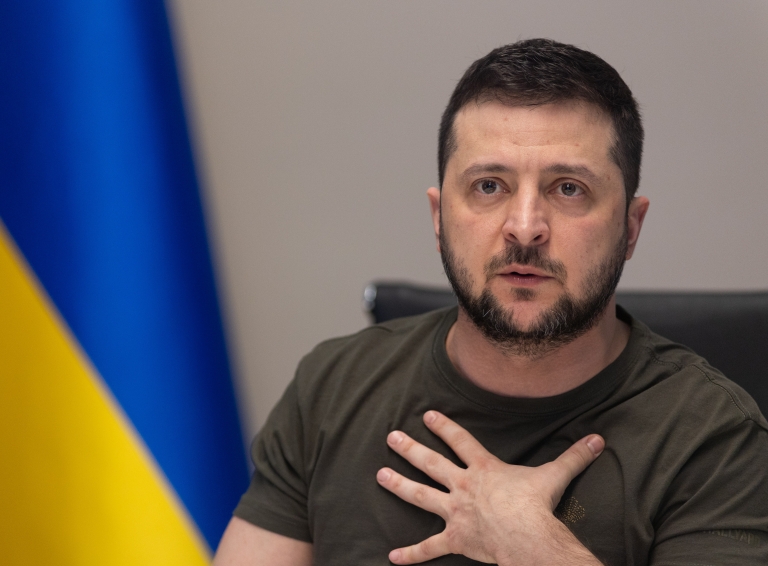 EPA/Ukraine presidency
Security guarantees and neutrality, the non-nuclear status of our state – we are ready to go for it… If I remember correctly, this is why [Russia] started the war

Russia says Ukraine has become “more realistic” in its approach but does not see its peace proposals as a breakthrough, so the war will continue. But this is Kyiv’s offer:

Ukraine’s bid to join Nato (and the EU) is enshrined in its 2019 constitution, so any change would require a referendum some months later.

What about Crimea and the east?

Russia is unimpressed with Ukraine’s plan for the future status of Crimea, seized by Russia in 2014, to be decided during 15 years of consultations. The Kremlin says Crimea is now Russian territory and the Russian constitution bars discussing its status with anyone else. “I repeat again and again: Russia’s position on Crimea and Donbas remains unchanged,” said lead negotiator Vladimir Medinsky.

As part of Kyiv’s immediate peace proposals, all Russian troops would leave Ukrainian territory and the future of the eastern areas held by Russian-backed separatists would be discussed by the two presidents as part of a ceasefire summit.

Ukraine will never agree to ceding sovereign territory. However, President Putin will not wish to abandon any territorial gains made during the war, especially as his declared aim is “liberating” Ukraine’s east.

Ukraine has never taken seriously Russia’s demand for demilitarisation, and Moscow’s insistence on “de-Nazification” is merely Russian propaganda. In the words of Ukraine’s foreign minister Dmytro Kuleba: “It’s crazy, sometimes not even they can explain what they are referring to.”

President Zelensky has said he is prepared to give Russian minority language status, along with the languages of other neighbouring countries, and does not see this as a major issue.

For Russia’s leader the West’s 30-member defensive military alliance has one aim – to split society in Russia and ultimately destroy it.

Ahead of the war, he demanded that Nato turn the clock back to 1997 and reverse its eastward expansion, removing its forces and military infrastructure from member states that joined the alliance from 1997 and not deploying “strike weapons near Russia’s borders”. That means Central Europe, Eastern Europe and the Baltics.

In President Putin’s eyes, the West promised back in 1990 that Nato would expand “not an inch to the east”, but did so anyway.

That was before the collapse of the Soviet Union, however, so the promise made to then Soviet President Mikhail Gorbachev only referred to East Germany in the context of a reunified Germany. Mr Gorbachev said later that “the topic of Nato expansion was never discussed” at the time.

Does Putin have designs beyond Ukraine?

If he has, his military setbacks in Ukraine may have put paid to any wider ambitions beyond its borders.

After hours of conversations with Russia’s authoritarian leader, German Chancellor Olaf Scholz concluded: “Putin wants to build a Russian empire… He wants to fundamentally redefine the status quo within Europe in line with his own vision. And he has no qualms about using military force to do so.”

Tatiana Stanovaya of analysis firm RPolitik and the Carnegie Moscow Center fears a spiral in a new Cold War confrontation: “I have very firm feelings that we should get prepared for a new ultimatum to the West which will be more militarised and aggressive than we could have imagined.”

Having witnessed Mr Putin’s willingness to lay waste European cities to achieve his aims, Western leaders are now under no illusion. President Joe Biden has labelled him a war criminal and the leaders of both Germany and France see this war as a turning point in the history of Europe.

Before the war, Russia demanded all US nuclear arms be barred from beyond their national territories. The US had offered to start talks on limiting short- and medium-range missiles, as well as on a new treaty on intercontinental missiles, but there is little chance of that happening for now.

What next for Russia itself?

President Putin has been stunned by the scale of the Western response to his invasion. He knew Nato’s members would never put boots on the ground in Ukraine, but he could not have guessed the extent of the sanctions that are already having a dramatic effect on Russia’s economy – and he is furious.

The EU, US, UK and other Western nations have targeted Russia’s economy in a variety of ways:

No peace deal with Ukraine will bring these sanctions to an end, and Vladimir Putin knows that. Instead he has turned on Russians who have opposed the war. “The Russian people will always be able to distinguish true patriots from scum and traitors,” said Russia’s president.

More than 15,400 anti-war protesters have been detained and virtually all independent media have been silenced.

There is no meaningful political opposition left as they have either fled the country, or in the case of opposition leader Alexei Navalny, jailed for years in a strict-regime penal colony.

No government has released money to improve public universities without our...