Post Views: 544,014
Governor Wike has dismissed the speculations that he is interested in the presidency in 2023. The Rivers governor also said it is too early to start playing the 2023 politics.
Wike added that the problem of 2023 should be that of the APC since it is the ruling party, adding that President Buhari will not allow his party to lose out.
Playing 2023 politics in the year 2020 is too early, says the governor of Rivers state, Nyesom Wike, according to a report by The Nation.
The newspaper stated that the Rivers state governor said this on Arise Television just as he dismissed speculations going round that he is interested in the 2023 presidency.
Leakblast gathers that Governor Wike said his focus is on developing Rivers state.
According to him, playing 2023 politics at the moment will distract him from fulfilling his promises to the people of Rivers state. 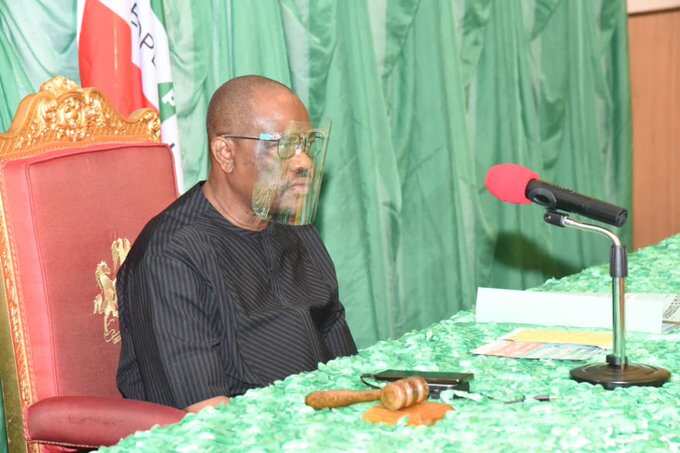 Read Also:Wike attacks police for allegedly harassing Ondo deputy governor
Governor Wike says it’s too early to play 2023 politics. “So, how can I begin to contemplate running for Presidency when I know I still have time to provide for my state. It is a distraction,” he said.
The Rivers state governor said the politics of 2023 presidency is the problem of the APC because it is the ruling party, not that of the opposition PDP. He explained that since President Buhari is completing his second term in 2023, some of his party members will want to take over from him.
The Rivers state governor also mentioned that President Buhari will not allow his party to lose out in 2023. His words: “The president is going and so people will want to take over the seat of the president.
In PDP, who are you taking over from. You are taking over from nothing. “We just took over a year ago. And then you are talking about Presidency.
When that enters your head, you won’t be able to provide the dividends of democracy to your people and that is the problem you see in APC.
“Everybody thinks of taking over from the President. So instead of you to concentrate you are thinking of taking over.
“You don’t even know the minds Nigeria. The point is that being a ruling party and with Mr President being there he won’t allow his party to lose out.”

Ribery to stay at Fiorentina despite home burglary